As my woodworking workshop is located at my main home in Regina, SK but the switching layout is to be built for the den in my two-bedroom condo in West Kelowna, BC, my design must allow me to make components in my workshop and assemble them to make sure that the design works. I will then dismantle and carefully label all components and then take them with me to BC where I will assemble everything.

In Part 4 I shared drawings of the components of the end guides that will be attached to the walls at each end of the layout, using components that are easy to assemble, disassemble and then travel with. The layout top which is to be 11 feet long and 28 inches wide is a bit more complicated - because of its size. I shall cut all the wood at home but will wait and purchase the rigid foam insulating board in Kelowna to cut down on the quantity of materials I will need to transport. The foam board can be easily cut with an Olfa knife or box cutter.

These drawings show my intended design:

Following are additional details regarding the design of the end guides in which the 2 inch nylon garage door rollers will travel: 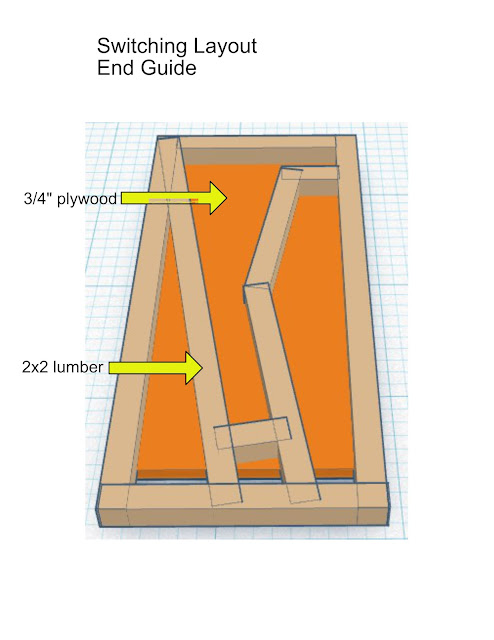 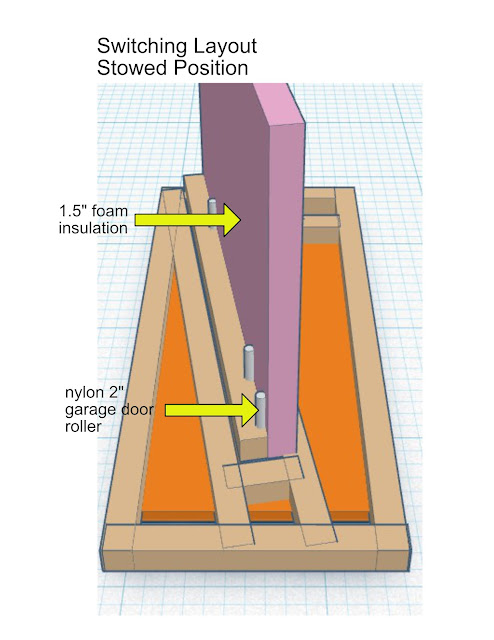 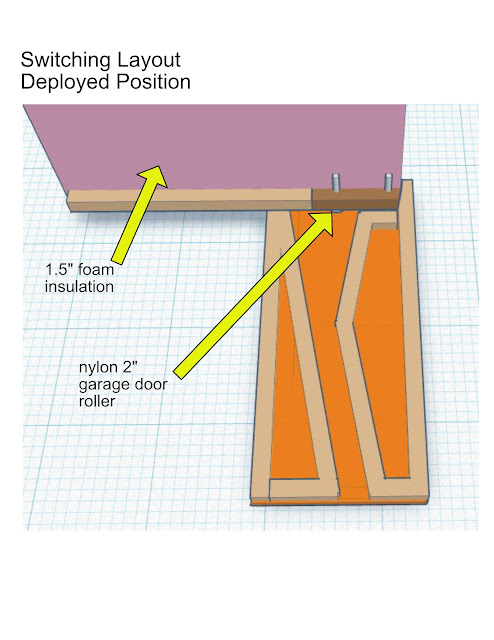 In Part 1 I said that one of my criteria for this switching layout is that, when stored, it must not occupy a lot of floor space. I have come up with a plan that will occupy an area along one of the 11 foot walls in the den and, when stored, will protrude into the room a distance of no further than 15 inches.

In the following drawing, the various colours depict: 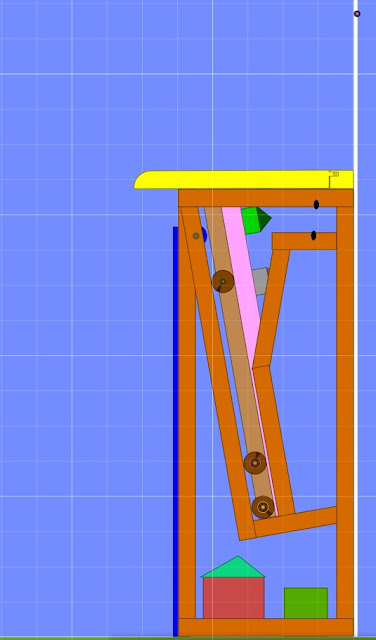 The following drawing shows the layout in its operational position: 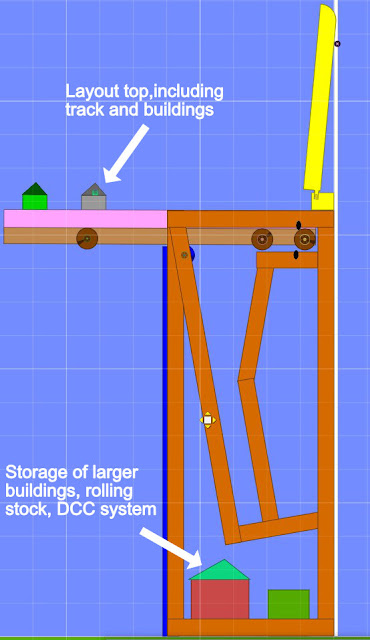 This is a short video showing how the layout will be raised and lowered:

I have devised the following track plan for my switching layout:

Crossings (hand made):
Turnout control:
Buildings to be all scratch-built.
This is a larger image, turned on its side:

On November 11, 2021 I wrote about my prostate issue and the need to have 33 radiation treatments. Those treatments ended on December 20, 2021 so Christmas 2021 was extra special for me. Roughly 2/3 of the way through my treatments I became quite fatigued and had very little motivation to do much in the way of model railroading, or anything else for that matter.

In the second week of January my wife and I drove to West Kelowna, British Columbia, to spend a couple of months in the two-bedroom condominium that we purchased in autumn 2021. As I have been preoccupied with obtaining and assembling furniture and going on a lot of long walks to enjoy the scenery and the (relatively) mild winter weather I decided to take a break from the blog.

After being away from my model railroading hobby for some time I put my mind to how I could build a model railroad in the den, while at the same time not permanently occupying much of the room and rendering it useless for any other purpose. I concluded that a shelf-style switching layout would be fun to try. I have never before built a switching layout.

Following are my criteria for this switching layout:

In upcoming postings I shall share a proposed track plan and my plans for being able to store the layout in such a way that minimal floor space is occupied.
Here are three photos from the balcony of our West Kelowna condo:

The above photo, taken in October 2021, is facing north-west showing Shannon Lake and, on the right, the Shannon Lake Golf Course.

The above photo, taken in January 2022, is of the same view.